In this day and age, we think of Houston marquee signage as being old-fashioned and generally used for schools, places of worship, and sometimes restaurants to get a quick message across. Once upon a time, marquee signs were popular and much more ‘jazzed’ up than they are today. So why have the tables turned on this once popular sign? Let’s look at the details: 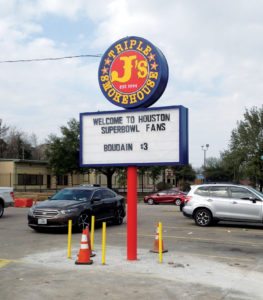 Signs used to be simple because they didn’t have to be grand for people to notice them. This was before the use of vehicles when the common, main mode of transportation was by foot. Because of the slower pace, signage didn’t have to be attention-grabbing like how they are today. This all changed once the automobile was invented.

While the first automobiles didn’t go anywhere near as fast as our vehicles today, this form of transportation was still faster than walking. The wealthy were the ones who were able to afford such a luxury, which also meant that they were likely to be the ones to buy into other luxurious services and products around town. The traditional form of signage just didn’t cut it anymore and business owners needed to change their signs to be more striking for those passing by at a faster rate. Their solution? Lighted marquee signs.

How Does This “New Technology” Work?

The plan was to create signage with a short, sweet, and to-the-point message in a large font. This made it easy for those passing by to read quickly and from further away. If that wasn’t enough as is, sign makers decided to add lighting around signage to make it even more flashy. While the lighting technique is an old one, it still works just as well today as it did at the turn of the century.

Since marquee signs have been created, the world of signage has completely transformed with many varieties and styles to choose from. Houston marquee signage is still a common form of signage and has even made a bit of a comeback with the rise of businesses being more playful with their posted messages. If you’re ready to jump on the marquee sign bandwagon, we’re here to help! Give us a call today for options and quotes.